In our post on innovation facets we outlined how innovation is not just one thing, but that there are different types of innovation that should be considered and appreciated in the public sector. We identified that different facets should be supported in different ways, in accordance with what they are most suited for. But before we dive further into the characteristics and strategies appropriate for each facet, in this post we’re going to explore some further nuances of the proposed model. We’ll look at what happens at the intersection between the different facets – say between mission-oriented innovation and enhancement-oriented innovation.

So far we have discussed four facets of innovation:

It is worth noting that a specific innovation or innovation process that starts out in one facet can move to another over time. For instance, what starts out as more incremental under the enhancement-oriented facet may in time become far more radical as it scales up (e.g. digitising one existing service may mainly result in efficiencies, whereas digitising many services can be transformative).  Furthermore, adaptive change and entrepreneurial discovery can lead to totally new solutions that change how the world is understood. Alternatively, ideas that initially seem radical may end up being relatively humdrum in their impact. In other cases there may be an overlap between the facets, such as where a mission is seeking to achieve a goal, but there is an expressed preference to build on existing interventions.

It is in this potential for movement between and overlap that we see some further nuances to the facets. 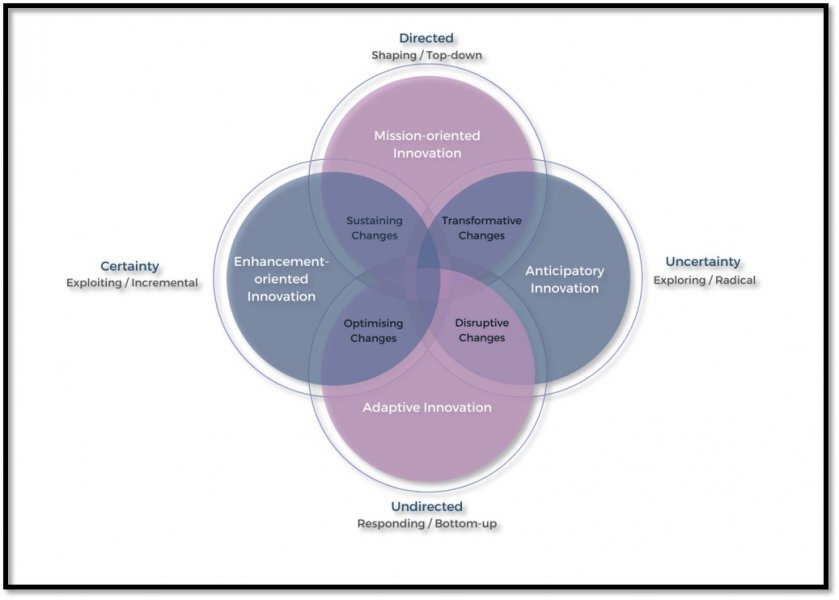 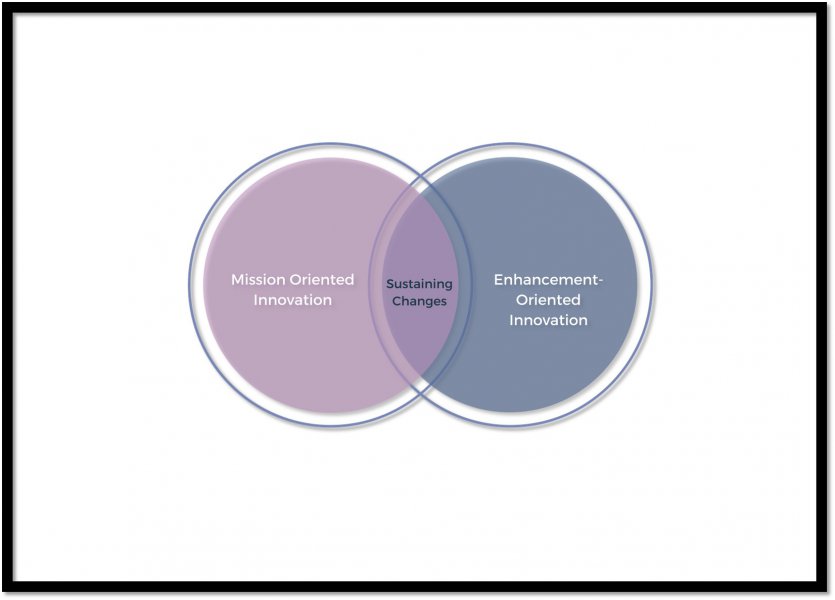 At the intersection of enhancement-oriented and mission-oriented innovation, we propose that the types of changes that are most likely to be seen are ‘sustaining changes’. These changes (drawing from the work of Clayton Christensen but adapting to the public sector context) are ones that are likely to sustain and extend existing business models, operating practices, and paradigms. For instance, under the banner of a climate change strategy, this might be about innovation that leads to energy efficiency improvements and gains, so called “end-of-the-pipe innovations”. Such innovation will not challenge the fundamentals of how things are currently done (i.e. it does not force anyone to use less electricity or change how power is produced or procured) and can help make efficiency gains while still contributing towards a mission (reducing emissions).

For instance, in Australia the government introduced energy rating labels, which helped consumers to know which consumer appliances were more energy efficient, and therefore more easily choose better options. This can lead to both reduced energy demand, but also a signalling effect that helps spur manufacturers to improve their product’s performance.

Changes such as these may require some adjustment and effort by parts of the system (e.g. organisations may have to change some things in how they work, some staff may have to retrain, etc.) and can result in clear demonstrable results but are unlikely to result in significant disruption or rethinking of the existing way of doing things. Indeed, sometimes these changes may help lock-in existing framing, by raising the bar that would need to be met by any other alternatives and thus making it harder for other options to be considered. As such, enhancement-oriented innovation can prolong the use of approaches and technologies which do not have a future and hold back transformative change. 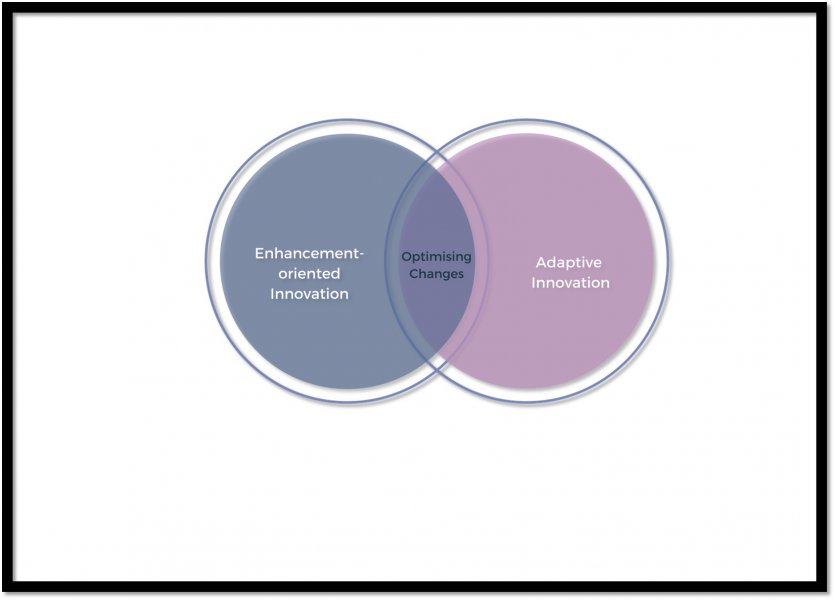 At the intersection of enhancement-oriented and adaptive innovation, we propose that ‘optimising changes’ will generally follow. These changes are ones that are both optimised for the environment and likely to result in efficiency/effectiveness gains, building on ongoing learning about what works and what doesn’t, and when.

An example can be seen with the FixMyStreet, a platform for reporting issues in a local neighbourhood such as graffiti, street lighting, or potholes. This innovation came from outside of the public service, but provided a streamlined process for identifying issues and placed more pressure on local governments to demonstrate their responsiveness. While the innovation itself may not always have been welcomed, the changes following from it are likely to be seen as positive, though there may be flow-on effects (e.g. streamlined reporting reveals blockages or failings in other parts of the system, that are then subject to pressure to innovate or change).

Optimising changes are similar to sustaining changes in that they don’t fundamentally challenge the existing approach, but they do allow for greater flexibility in spanning any gap between what is being intended and what is actually happening. 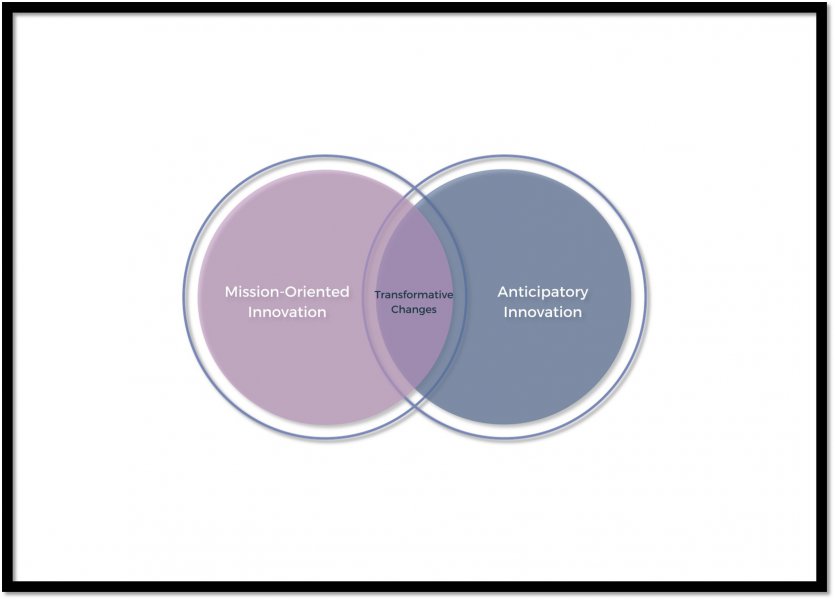 At the intersection of mission-oriented and anticipatory innovation, we propose that ‘transformative changes’ are most likely to be seen. These are changes that overhaul how things have operated, but in a way that is in line with the mission/political priorities of the day. They may be challenging, but not in an antagonistic way – i.e. they are likely to be in-line with declared or implicit values and expectations. An example is that of Estonia’s e-residency, which takes the notion of residency and extends it into a new domain. This potentially offers transformative change in terms of how residency is thought about, the opportunities (and services) that can be offered virtually, and how people can be connected with a nation-state even if they are not citizens or physically resident. 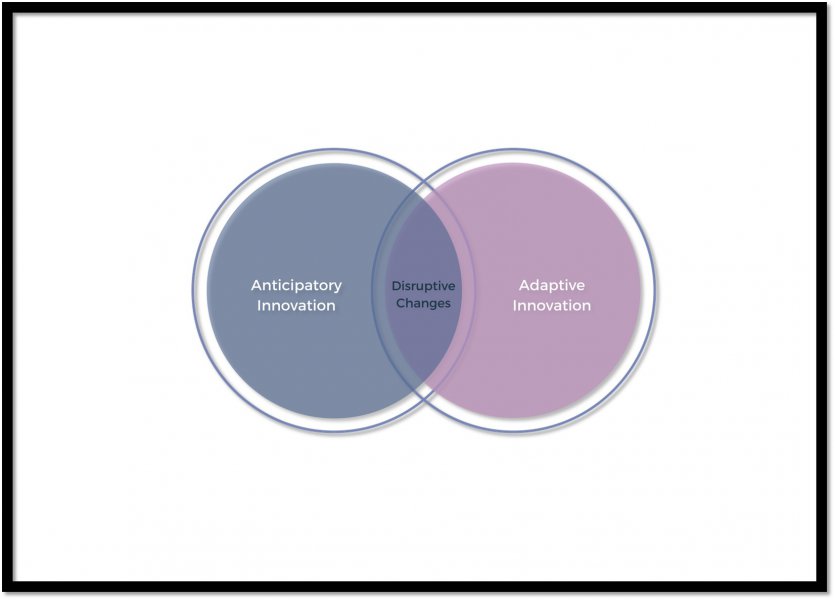 At the intersection of adaptive and anticipatory innovation, we propose the most likely sort of change here will be ‘disruptive changes’. These are changes that may well have emerged in response to a changing environment/changing technologies but due to their origin from a bottom-up source (e.g. front-line staff, partners or stakeholders), they will challenge existing models and strategies, and may therefore be resisted or pushed-back against. An example here is Talent Cloud from Canada, grassroots project which includes an experimental staffing platform for project-based employment. This is a challenge to traditional working structures and considerations of how people should be organised. The disruptive nature of these change can be diverted if there is subsequently buy-in and ownership from the centre/top (thus changing it to more of a transformative change), however this may not always be easy to do (i.e. the change is in direct tension with what has gone before).

The different types of change help us think about what it is we’re actually trying to achieve, and thus what each innovation facet can offer in pursuit of that change. Of course there is no ‘right’ level of change (or innovation). What is appropriate will differ between contexts and over time. This model is intended simply to help distinguish better between what is sought, and to match it with the appropriate strategies.

Your help in developing the facets model further

In our next posts, we will explore more deeply the characteristics of innovation in each of the facets, and the implications for how they should be managed.

As always, we are grateful for any feedback about this work, so that we can ensure that we are developing something that is both helpful in understanding innovation and practical in undertaking innovation. We welcome your comments below, by email or on Twitter.